Peter Jost (1921-2016) is considered a founder of the Tribology (the study of friction, wear, and lubrication), because the term “tribology” became widely used following the 1966 “Jost Report.” This was a UK governmental report, which stated that friction, wear, and corrosion were costing the UK huge sums of money every year. As a result, the UK set up several national centres for tribology, and the word “Tribology” became increasingly popular. One should note that the word “tribo-physics” was also used by David Tabor (1913-2005) already in the 1940s as a name of his lab in Australia.

In Jost’s obituary in The Telegraph, I found an interesting explanation about the Tribology:

“If in the days of Newton, bananas had been available and Newton had slipped on one of them, the laws of tribology would have been enunciated by him there and then”.

I like this parallelism between the gravitation and friction, because, in a sense, friction is complimentary to the inertia and gravity. Galileo and Newton discovered the inertia and gravitation forces only after they (and their predecessors) realized that friction exists and should be neglected. However, this realization has also marginalized the status of friction in physics for centuries, because friction was now viewed as something that contaminates the study of pure physical forces, rather than as a fundamental force by itself.

By the way, I met Prof. Peter Jost once, at the World Tribology Congress in Kyoto in 2009, this is the photo: 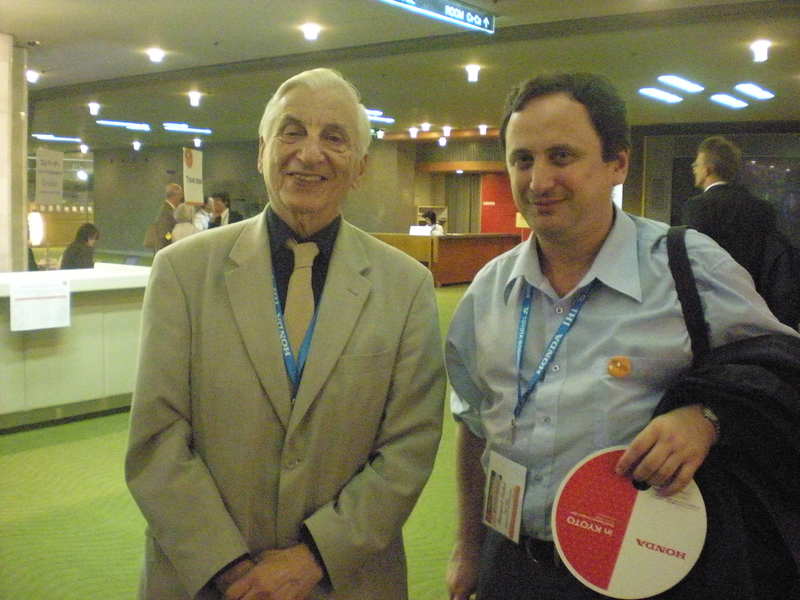