My doctoral research (some 15 years ago) was about the Adams (or Adams-Martins) instabilities. We showed that this type of instabilities exists for multiple asperity contacts (modeled as a periodic set of contacts, see, M. Nosonovsky & G. Adams, “Vibration and Stability of Frictional Sliding of Two Elastic Bodies With a Wavy Contact Interface” J Appl Mech 71:154

Several years ago, together with my student Vahid Mortazavi, we studied a model with a temperature-dependent coefficient of friction and showed that it can lead to instabilities due to a positive feedback. We had in mind engineering applications (carbon-carbon composite brake disks for airplanes, which demonstrate poor reproducibility of results, which we hypothesized may be a consequence of an instability), but I think it could be relevant also to many other situations including the rock mechanics (Mortazavi et al., “Stability of Frictional Sliding With the Coefficient of Friction Depended on the Temperature”, J Tribol, 134:041601).

More generally, it is desirable to generalize the field of friction-induced instabilities / vibrations / self-organization for a more general set of effects beyond pure mechanical  ones, e.g., wear, thermal, chemical, composite materials, in situ tribofilms, etc. The entropic approach gives a general stability criterion (of which pure frictional instabilities are a particular case). I had a review paper about that Entropy in Tribology, e.g., Eqs 18-23 is a discussion how the “velocity-weakening friction” principle can be generalized on  protective tribofilms in composite materials. We also wrote a book  “Friction-induced vibrations and self-organization: mechanics and non-equilibrium thermodynamics of sliding contact” (CRC Press, 2013) about that. 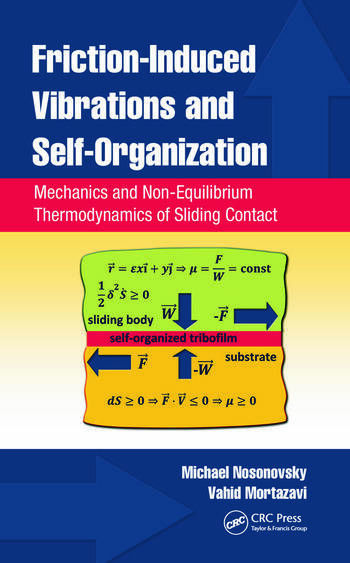 I think that the area of friction-induced instabilities will have many applications related to non-mechanical friction-induced effects (chemical, thermal, composite material), which should be investigated in detail.