I am not a big fan of measuring scientific accomplishments by citation. Your results, found in your publications, should speak for themselves. The problem, however, is that many people would not want to read your papers and discuss your results. Many people in Academia would also make various weird assumptions based on all kinds of superficial consideration, instead of reading your papers and viewing them in the context of the scientific literature. Consequently, unfortunately, you results do not always speak for themselves. In that case analyzing citation does not hurt.

Elsevier has recently published an updated database "Updated science-wide author databases of standardized citation indicators" https://elsevier.digitalcommonsdata.com/datasets/btchxktzyw/3
Their methodology is explained in detail on their website. Apparently, they ranked the top ~2% of world researchers, which constitutes about 190,000 out of the total roughly 10 million researchers in the world (there are 4.5 millions of PhD degree holders only in the US).

I was pleased to see that I am at the 27,023-th place (or have rank 11,970) out of all world researchers, scientists and scholars in any field. I decided to further play with numbers in order to better understand it. Source: https://data.mendeley.com/public-files/datasets/btchxktzyw/files/b3e31af2-054c-4b3a-b9c5-6fd9bf10557a/file_downloaded

First, I selected those who work in my formal field, Mechanical Engineering (ME). Namely, those who indicate ME either as their primary or as their secondary field. That filtered out more than 97% of researchers. ME is not the hottest scientific field, so among the top cited scholars there are only 2% of mechanical engineers. I turned out to be at the place number 223 among all researchers identified as Mechanical Engineers in the world.

Then I decided to filter only US-based researchers. Many of top-cited mechanical engineers work in the US. I turned out to be the number 68 among all Mechanical Engineers in the US. And after that, I decided to consider the US Midwest, namely, Wisconsin, Michigan, Ohio, Illinois, Indiana, and Minnesota. You must compare yourself with you peers. I turned out #16 in our region.

The table includes the total number of publications, the year of the first and of the last publication and the “rank” based on citation (self-citation excluded), which indicates researcher’s place when compared with all disciplines in all countries.

I think it is interesting to see who is on the list above me. Some people have retired, but most of them are active. Almost all of the 15 guys above me (with two exceptions) started their careers in the 1960-1980s. My former boss from my postdoc at Ohio State University, Prof. Bharat Bhushan (he is now emeritus), is at the top of the list. Zdenek Bažant is a famous mechanician and an expert in fracture mechanics. Ted Belytschko (1943-2014) was a prominent scholar. Prof. Alexander Yarin is very famous in fluid mechanics and in particular in the study of droplets. There are other famous people on this list.

What does it tell us? I do not know. But in my opinion (while it is up to peers to judge), I am doing not too bad. 🙂 In Wisconsin, there are only two ME professors above me: Prof. Rolf D. Reitz, who is an Emeritus Professor at UW-Madison, and my colleague and friend State of Wisconsin and UWM Distinguished Professor Pradeep K. Rohatgi, who started his career in the 1960s. While these ratings are a vanity fair, and it is much more important how your work contributes into the history of ideas, unfortunately, some people are not ready to talk with you about scientific ideas. And in that case formal ratings could help you to move forward.

While one should not overestimate the value of high citation, there is also the tendency to underestimate it, especially in the Midwest and particularly among people who do not publish much themselves. Despite that, citation is important, and many academics still value citation and productivity. When I visited the ITMO University in Russia, I was surprised to find the slogan “In H-index we trust” at ITMO – I made a selfie next to it. 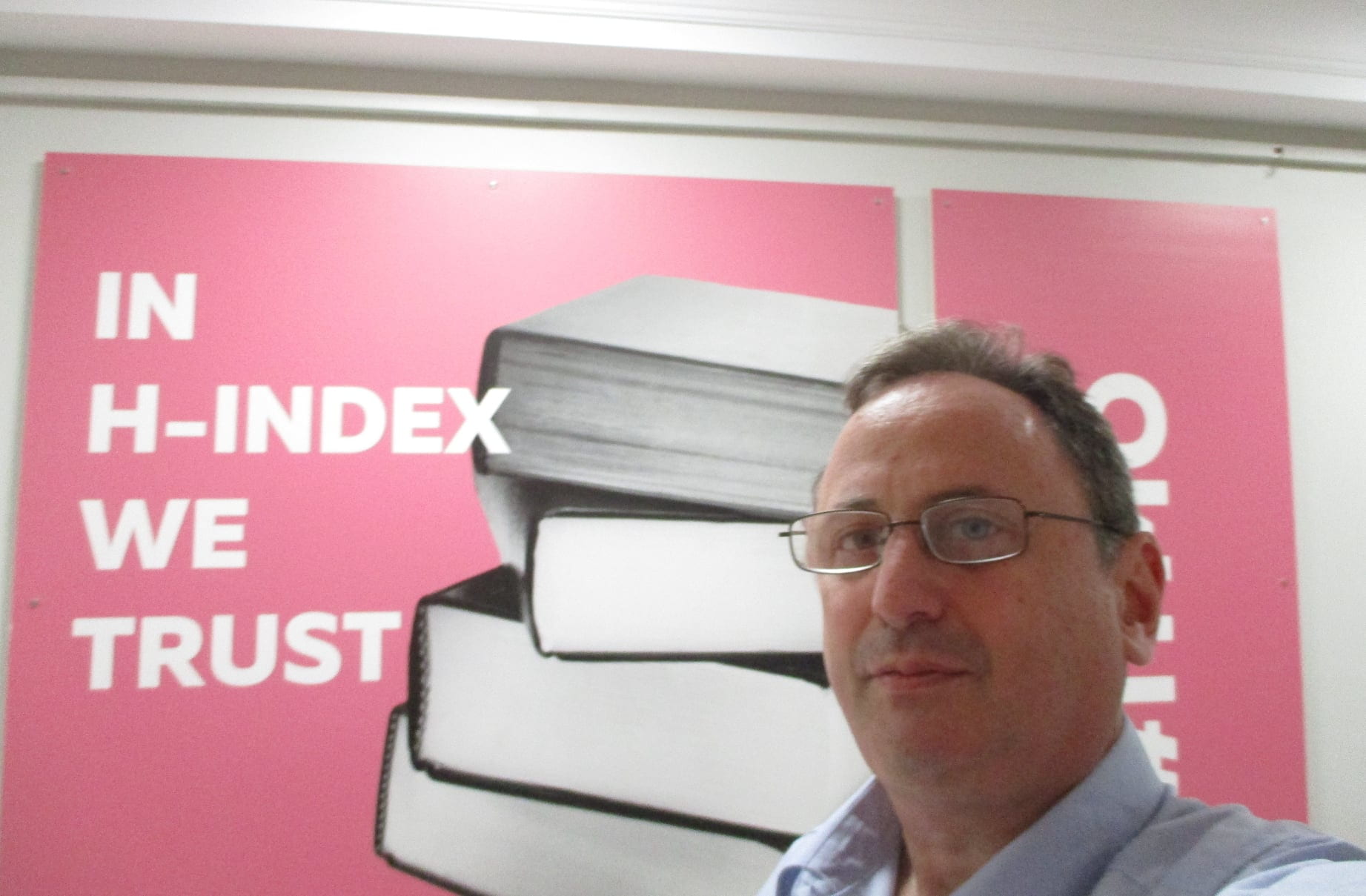