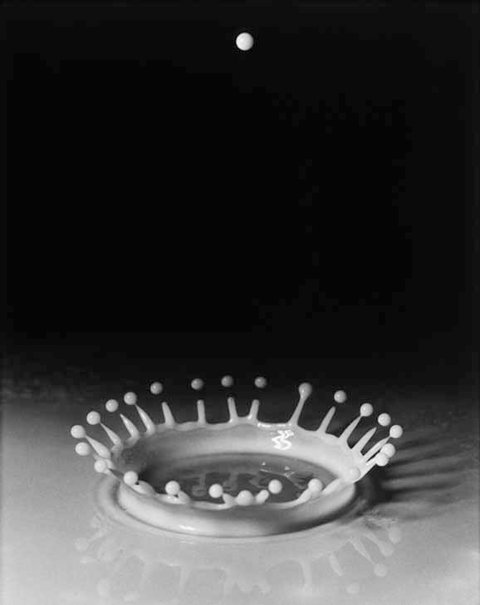 The fluid mechanics can hardly predict whether something like a corona splash would form. This is because the process involves instabilities. More particularly, the Rayleigh-Plateau instability can be responsible.

In general, there are three types of forces involved: the inertia, viscosity, and surface tension. The ratio of the inertia to viscosity is called the Reynolds number (Re), while the ratio of the inertia to surface forces (capillarity) is called the Weber number (We). These two non-dimensional numbers are supposed to characterize the effects caused by droplet’s interactions with the fluid. They define whether such effects as splashing, spreading, receding, or bouncing would occur. Similar phenomena occur when a solid sphere, rather than a liquid droplet, hits a liquid surface, or when a droplet hits a solid (e.g., a superhydrophobic) surface.

However, recent studies have shown that even a small change of the surface roughness (e.g., making the solid surface superhydrophobic) or an addition of polymer molecules to the liquid can change drastically the behavior of the droplet. In other words, the capillarity affects the flow pattern even in the limit of large Weber numbers. The effect is related to important concepts of modern physics, such as the singular limits.

There are different types of viscous forces and there may be different types of capillary forces. They are not always described by only Re and We. The viscosity of the three-phase line becomes important for splashes, so although We is large, it is insufficient to predict the splashing behavior. The effect may be related to “the intermediate asymptotics” method. However, to demonstrate this would require an additional study.

When I was a student some 30 years ago, a professor who taught us the Theory of Mechanical Stability, said once that mechanics of the 21st century would be Mechanics of Instability. I think he was right to a great extent.

The old pond from the Frog Haiku is a symbol of eternity, while the splash is a symbol of evanescence. The poem is good for a meditation about philosophical matters. There is a long time scale and a short time scale, and a lot in between. Next time when you want to think about these issues, you can use the list of literature below to prepare for your meditation:

I will also add a reference to our paper, which discusses incoming droplet interaction with novel superhydrophobic concrete. It is important, because in real life water comes as a rain or mist.
Rahul Ramachandran, Konstantin Sobolev, and Michael Nosonovsky, Dynamics of Droplet Impact on Hydrophobic/Icephobic Concrete with the Potential for Superhydrophobicity, Langmuir, 2015, 31 (4), pp 1437–1444