As a board game enthusiast, I often find myself grappling with issues of storage. Indeed, materiality itself invariably involves questions of just where to put all this stuff we accumulate. However, board games present their own unique challenge, as one must not only consider how to store the games themselves, but also all the parts that they contain. Board games, especially more advanced ones such as Gale Force Nine’s Dune frequently contain numerous pieces and components. Frustratingly, the inserts included with the games sometimes fail to organize these pieces and components in a satisfactory way. Mondo’s otherwise excellent Video Vortex represents a particularly egregious example of a poorly designed insert, as the game contains numerous components (including cards, dials, player boards, character sheets, tokens, and more) but the insert only holds the cards that come with the game. In response, many tabletop fanatics including myself have taken it upon themselves to create their own inserts intended to address the issue of storage. Welcome to the world of fan-designed board game organizers. 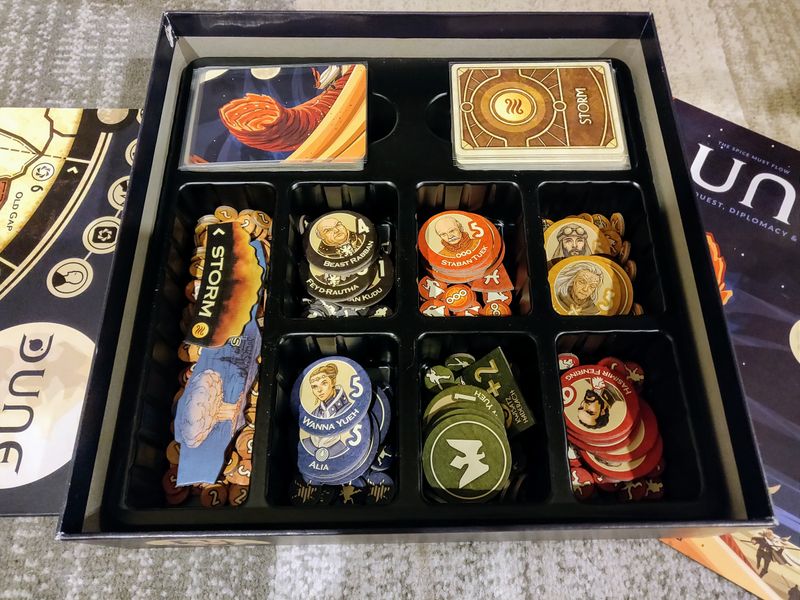 The many components of the Dune board game. Image credit: https://boardgamegeek.com/image/5105032/dune

As I delved ever deeper into the board game hobby, I discovered that analog gamers have devised several rather ingenious ways of storing and organizing the components of their games. For instance, there exists a network of fans who develop and share their own homebrewed plans for DIY foamcore inserts. In fact, the website of the Esoteric Order of Gamers includes an entire category devoted to the distribution of plans for foamcore inserts designed for games such as Doom: The Board Game and Lords of Water Deep. Foamcore is an inexpensive but effective solution to the problem of storing and organizing game components, as it is readily available in most craft stores and allows fans to easily create inserts that more adequately arrange the game pieces but also make set up and tear down much easier.

A glimpse at a fan-designed foam core insert for the game Abomination: The Heir of Frankenstein. Image credit: https://www.orderofgamers.com/wordpress/wp-content/uploads/2019/12/foamcore.jpg

In addition to the DIY foamcore movement, board game geeks have taken to designing 3D printable inserts that likewise assist with storage, organization, set up, and tear down. Websites such as Board Game Geek, Thingiverse, and Yeggi all host a thriving subculture of fan-designed, 3D printable organizers and inserts for a wide variety of games that include numerous small components, including Godzilla: Tokyo Clash, Getaway Driver, and Wok Star. Given that they are made using plastic filament, these organizers are much more durable than the foamcore inserts. Additionally, they sometimes make set up and tear down a breeze as players can simply remove different parts of the organizer from the box and use them to keep the pieces arranged on the table. Of course, some games go overlooked by these industrious fan designers, and a search for pre-existing plans for organizers and inserts occasionally proves fruitless. For instance, when I went looking for an organizer that I could use to replace the insert in my copy of Video Vortex, I was unable to find one even with the help of a friend and fellow board gamer. He suggested I design one myself. I initially rejected the idea, as I did not think I had the mind for such a task. Yet his suggestion stuck with me, and as I looked at the other organizers that my friend had printed for me I started to come up with ideas for how to fit all the components snugly in the box. I drew up some rough “blueprints” (for lack of a better term) and sent them to my brother, who designs parts for manufacturing equipment and knows how to use C++ to design things. Sadly, he proved too busy to assist with the design. At that point, however, my friend told me about Fusion 360, a software application that assists users in designing 3D CAD, modeling, manufacturing, industrial design, electronics and mechanical engineering. I downloaded the free version of the software and, after some trial and error, managed to design a set of organizers that would adequately arrange all the pieces of my Video Vortex game in the box. The activity of designing and creating these board game organizers conforms to Mel Stanfill’s and Benjamin Wu’s ideas regarding fan labor. According to both Stanfill and Wu, fan labor occurs when fans use their own time and money to produce things that the companies the control a media object or canon do not. Occasionally, these media companies sometimes profit from fan labor, but this is not the case with board game organizers, which exist more within a makerspace or DIY context. In that regard, board game organizers and the labor that goes into creating them might conform more to Stanfill’s concept of lovebor, which refers to the act of loving something and then sharing that love. Board game fans love the games, but they also love the idea of storing and organizing these material things in a way that both adequately arranges all the pieces and assists with the playing of the game via streamlined set up and tear down. Their love compels them to create these organizers and then share them with others without the expectation of remuneration. In that regard, then, they also fall under the purview of the gift economy, wherein valuables are not traded or sold but rather given without expectation of future rewards.

My lovingly organized board game and puzzle closet. Photo by author.

Ultimately, whether looked at as fan labor, lovebor, or an example of the gift economy, the subculture of designing and creating board game inserts serves one primary purpose: to help people store and organize their stuff, and a beautifully arranged shelf is its own reward.