In the last week of September we played Superflight. Superflight was created by GrizzlyGames (@_grizzlygames), a student run indie company in Germany. It is a game that is something like a third person flight simulator in which you play a flyer in a wing-suit traversing randomly generated mountainscapes. 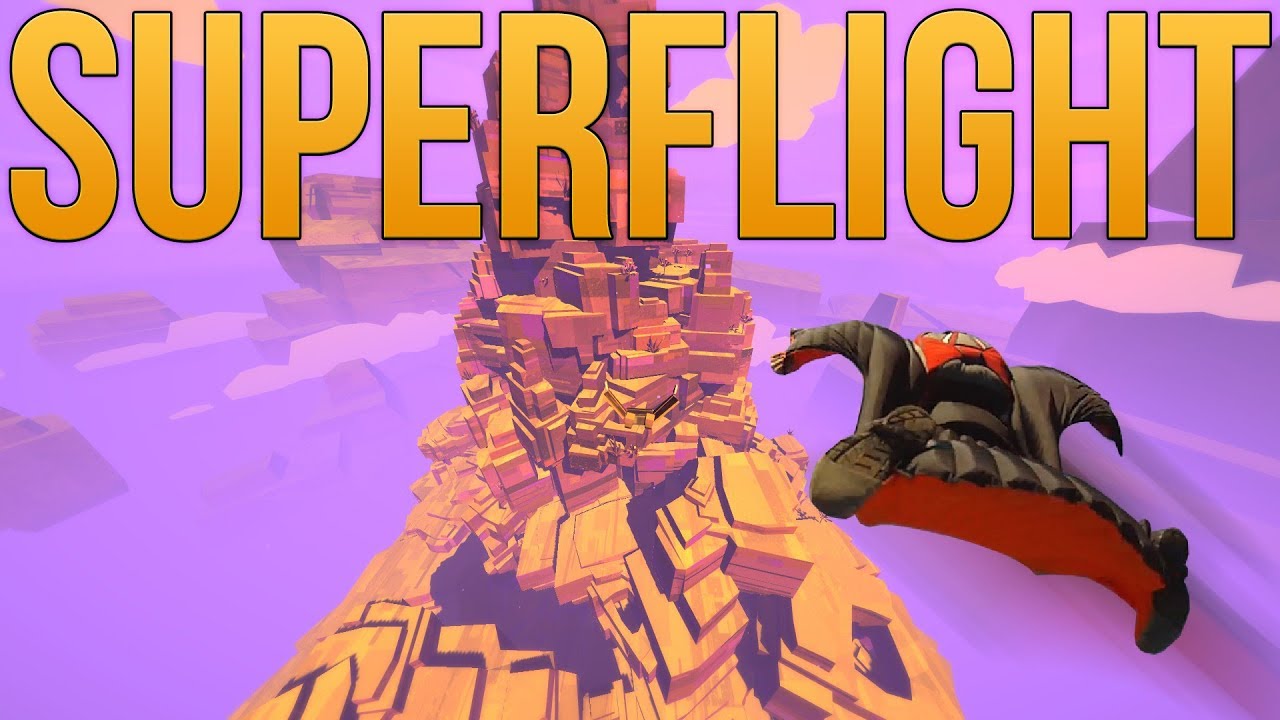 Scoring points is simultaneously easy and difficult the main objective is to keep flying, with secondary goals of flying through narrow mountain passages or flying extremely close to the mountain walls. You rack up points and the harder the stunts are the more points you get.

Nathan and Kelly started us off on the stream flying through the various colourful foggy mountainscapes and continuously dying in the first few minutes. They were joined by Erik and later by me, Laya. Although I enjoyed all of the conversation today I am going to focus on a topic we come back around too quite frequently on the Lunch Zone. Why don’t Kelly and I play the Lunch Zone games? Although this is a relatively reflective question as opposed to the theoretical suppositions we generally engage, I think it is worth noting if only because we have discussed it so many times.

This discussion is generally precipitated by Nathan asking either Kelly or I if we want to play. We consistently respond in the negative and invariably Nathan will then ask, “but why don’t you want to play?” It has become an ongoing conversation one we build on and add to overtime (coming almost to the point of banter, which can be seen in this episode). This time around we focused primarily on why we (Kelly and I) are uncomfortable playing on the Lunch Zone. At this point I stream regularly on my own channel and did play consistently on Brunch Bosses and The Twitching Hour for quite some time, so why don’t I play on the Lunch Zone??

In a semi-roundabout way both Kelly and I recounted our own experiences playing co-locally growing-up, Kelly with siblings all through her childhood and I with my guy friends later in high school. For Kelly dying meant she had to pass the controller and with 8 siblings “who knows when your going to get the controller back.” She played Final Fantasy offline with her sisters for sometime and moved to playing Call of Duty online during her undergraduate. CoD was an experience ultimately plagued by the toxic culture of gamer boys (perhaps toxicity particularly in CoD – an insinuation alluded to in the conversation) and she put down digital games for nearly a decade.

For me, I was worst of the players around me (i.e. dexterous controller ability) and so rarely played, but enjoyed watching others (outside of Guitar Hero which I rocked at – pun intended). Reflecting back on my own gendered experience in games I find it far more comfortable to sit back and watch when I am in the company of others, particularly if those others are people I perceive to be skilled at digital gaming. Listening back on my own language I make the assumption that Twitch viewers and the others in the room would rather watch someone who is skilled rather than watching me die over and over in the first 2 seconds.

Kelly and I both agreed that if we were playing a game that we felt comfortable with, that is a game we had played before we would be far more likely to play. When it’s a game we have never touched, we don’t want to try and learn while we are being watched both locally and by viewers. Erik and Nathan on the other hand had no qualms with playing new games on stream.

The conversation does often come back around gendered play. Why is it that Kelly and I, the current women of Serious Play (Krista-Lee Malone we miss you) are the two that play the least often on any of the shows we currently host (outside of analog games of course)? This turned into a fruitful discussion about what it means to play co-locally with others, what it means to play online with others, and what it means to play totally solo (though as we have said many times games are always social, if nothing else you are always playing with the designers). Kelly and I both have histories of gaming with toxic gamers. For me, I wonder often about how much of hesitancy comes from an internalization of the toxic culture surrounding games.

There was a Facebook post several years ago now that discussed the ways we, as Americans, discuss women and math. Women are bad at math (or so the story goes). While I was growing up my mom often told me she couldn’t help with my math homework because she was no good at it. However, women who run and take care of households (something expected of most women up until recently) do math all the time. From calculating time and schedule to figuring groceries and monthly budgets, women were (many still are) in charge of many things that utilized math on a daily basis. So many women are extremely good at math, but not math in the way we traditionally figure it (academic/professional). That didn’t stop several generations of women from believing they were bad at math however, and the lack of women in STEM still today shows that, that internalization still persists. Now, I can tell you for a fact, based on the number of times I die in any video game I do not have a hidden skill for digital games that I just haven’t showed you yet. But, that doesn’t mean that we, as gamer women don’t internalize the messages of gamer culture. We do, and it impacts the way we play, which is just something to think on.